No One Who Loves You Will Hide You

This morning I came across a photo of actor/photographer (AMAZING one at that) Lance Gross and girlfriend/baby mama BC Jefferson out for what appeared to be a day of shopping. The caption underneath the photo read, “No man that truly loves you and wants to be with you will hide you.”

I know some people may comment that when dealing social media there is such thing as sharing “too” much; but when thinking about significant others in general, I believe this statement to be true. You don’t even have to say ‘love‘ — you can substitute it with ‘values‘ or ‘likes‘ or ‘respects‘ or ‘is proud‘. It all reads the same.  If you are in a relationship with someone who doesn’t allow their feelings for you to be visible to others, you may want to rethink this situation you’re in.

Society has done it’s part in trampling over the euphoric glow that  is supposed to come with being in a relationship by exalting images of side chick heroines, glorifying males for successfully juggling multiple women, and claiming that a real bad b**** sticks around for whatever. This is a big bowl of HOGWASH.  Men and women will NEVER have the solid relationship they desire if they settle for being an “option” instead of the end all be all choice.

Over the years I’ve had plenty of friend girls who have worked my ever lasting nerve by choosing to stay in “whatever-ships” with low down, no good men who have had absolutely NO romantic interest in them at all! I’m not saying I expected the guys to buy hot air blimps with their pictures on it — but like I have told my friends, if the only place you’re able to “be somebody’s #1” is cooped up inside the house or around their immediate family, YOU DON’T MATTER TO THEM! There is no such thing as an “unspoken love” unless you’re in love with mas’sa and you’re slavin’ out in the fields! (somebody go run and get me a choir and some timber, cause I’m preaching here!) Oh and don’t think it’s just ladies, men can be “secret lovers” too!

“But you don’t know how we roll. We’re taking our relationship at our own pace Joc.”

Well listen here lovelies, there are some key signs to tell if the person you’re into is actually ashamed of you, or has no intentions of creating a future with you….

#1 They don’t introduce you as their girlfriend/boyfriend. You can make up ALL the excuses in the world to soothe your conscience but it won’t change the fact that they just don’t look at you the same as you do them. Titles are important when it comes to feelings, and the term “my special friend” is only for people over the age 60. If you’re thinking you are in a monogamous relationship or heading towards one, and the person you THINK you’re with is still looking at you as a good time girl or a sugar daddy — something is wrong here. If they can’t introduce you properly to friends, family, colleagues….well shoot ANYBODY really…then you’re wasting your time because they’re obviously embarrassed of you.

#2 They act shady online. I KNOW I’ll get a lot of flack for this, but it has to be said. Years ago I used to think that social media was TOO intrusive, but I’ve come to realize that it’s part of life as we now know it. I’m not saying you have to put “in a relationship with ____” but doggone it, “in a relationship” should be up there! Some make the argument that people will cheat ANYWAY, but if you’re optimistic like I am and know that that’s a lie…wise up. If you think you are in a committed relationship with someone and it doesn’t reflect on social media — there may be reason to have a heart-to-heart or a bail out plan.

#3 (If you DO see the light of day together) they take you to hidden venues. If you take a honest look at your “relationship” with the person you’re into and you realize that the only public places you frequent together are drive-thrus, the social security office, the dry cleaner, the ice cream parlor, or worse…you car — then that person is clearly embarrassed of you and has NO intentions of letting the world know that they value you as a girlfriend/boyfriend. I don’t care HOW laid back or introverted a person is…they DO go out sometime! Shoot, even if it’s to a club or family dinner at the Olive Garden…if they make an excuse as to why you can’t come or don’t invite you AT ALL…it’s time to walk away boo. If you’ve JUST started dating someone, that’s another story because you’re feeling them out for the first time, but if months and years have passed and you’re STILL going to the same “out of sight out of mind” places, you need to reevaluate your situation.

#4 There is ZERO PDA going on. PDA can encompass a variety of affections — you don’t have to slob each other down in the Drop Zone line at Kings Dominion; but if you notice that you don’t hold hands, stare into each others’ eyes, kiss, hug, hold each other or anything like that in public, it may be a small red flag. The PDA level may vary depending on how far your “relationship” is in your eyes. If you feel that you’re newly dating, then a make out session may be #TeamTooMuch; but if you’re in a long term relationship, supposedly engaged, or married — there needs to be at least a hand hold or an eskimo kiss!

#5 They have an excuse as to why they aren’t willing to meet your friends. This is a HUGE RED FLAG! If you have good friends, they can pick up if someone is acting suspicious and the “apple of your eye” will know it! Of course you’ll have some bold folk who will lie right in your friends’ faces in addition to yours, but on average, they’ll try to convince you that “they’re not ready to meet your friends” or “they think your friends will judge them” or some other bologna. What they’re really saying is, “I don’t have any romantic interest in you, and since you’re not someone I’m serious about, I don’t want to waste time putting up with your friends.” Now before you jump all out of your skin and yell “BUT I’VE MET THEIR FRIENDS!” My response to you is…..SO?!?! To be honest, your guy/girl probably jokes with their friends ABOUT YOU behind your back. So they are in safe territory with you meeting their friends because their friends already know what the deal is. Love yourself and reevaluate what you want to do.

“No one that truly loves you and wants to be with you will hide you.”

If you read that statement and are truthful with yourself, you will know if the man/woman you’re tagging along with sees you as a disposable hobby or someone they can create a future with. Be wise. Tread carefully. But above all — be honest with yourself. I would hate to see you waste another second, or another day, or another year pouring yourself out, waiting to be desired as the lovable ‘you’ YOU are! ❤

“The Anthem” ( and more) by Drew Chambers

Lord knows I love me some Drew Chambers! I’m blessed to not only say I’ve worked with him professionally, but to also call him one of my best friends! Support him ya’ll! – Joc

Here are some of his other videos: 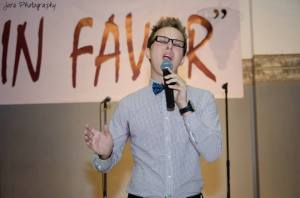 Filed under Around The World